A Note From Pastor Laura 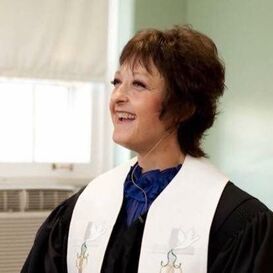 Beloved People of God,
We are now half-way through the season of Advent - that season when we remember that a hope, peace, joy, and love - that passes all understanding, are available to us through Immanuel or God-with-us.

This year, in worship, we have been reading through the events of the Bible in chronological order (we learned that the Bible is not laid out that way, but rather, like a library, with different genres sectioned together).

In November, we traveled with the ancient Israelites from slavery in Egypt to freedom at the base of Mt. Sinai. On the way we witnessed miracle upon miracle - the mighty power of God at work in the lives of God’s people!

We remember that to escape slavery, God sent plagues upon the land of Egypt, which eventually forced the Pharoah’s hand to free the captives. As God’s people fled the land, Pharoah changed his mind. His army pursued with the hope of recapturing God's people. Eventually, the Israelites found themselves standing at the water’s edge – looking at an impassable Red Sea. With nowhere to run or hide, they no doubt heard the hooves of the horses and the wheels of Egyptian army’s chariots churning in the sand behind them. Surely, thinking they were doomed to die or become captives again they cried out to God, to which God responded - again – with the miraculous parting of the Red Sea. Creatively working with nature, God provided another passage to freedom. Again, God made a way, where there seemed to be no way.

Miraculously, God continued to provide for the people as they made their way forward…into an unknown future. In the book of Exodus, we witnessed God provide for and protect the people along the way. God dictated to their leader, Moses, the Ten Commandments, a love letter outlined in "10 bullet points." The Ten Commandments: a love letter meant to guide God's people, on how to live lovingly, respectfully, and honorably with one another and with God.

When the newly freed Israelites found themselves to be hungry - literally - God sent miraculous bread from heaven called manna – it looked like snowflakes or frozen dew on the ground. When they were thirsty, through Moses, God caused sweet water to miraculously flow from a rock. With no map to follow, God would lead them into their future, by a pillar of cloud during the day, and a pillar of fire by night.

Miracle after miracle. God kept God’s promise to always be with them. Over and over again, God made a way where there seemed to be no way.

In the 13th chapter of Numbers, the book which records the ancient Israelites 40 years of wandering in the wilderness before entering the Promised Land, we learned that the Israelites had camped at the base of Mt. Sinai for about a year. The time had come however, for them to pack up camp and continue onward to the land God had promised them. move forward. After an eleven-day journey, from the wilderness of Paran, Kadesh Barnea, Moses calls a leader or a chief from each of the twelve tribes that make up the larger community, called the "Israelites."

The twelve leaders enter the land, spying and scoping it out from the deepest south to farthest north, from the widest parts of the east to those in the west. Prior to departing on their mission, Moses had given instructions to record the geography of the land – to map out its roads, its mountain ranges, its lakes and bodies of water. Take note of any trees and their location, he had said – because those locations were indicative of land, perfect for future agriculture and farming endeavors. The spies were to take an accurate count of ALL the men, women, and children. Was their military strong or weak? Did the majority of people live in tent cities, or did they camp in forts and strongholds?

“Be of good courage,” Moses told them. The spies spent forty days in the land and the reports they returned with were a mixed bag! Ten spies said that the land was “good” and flowing with milk and honey. Even so, they gave Moses this warning: “Even though it is good, we cannot take this land. There are too many of them and they are like giants and we – well, we are like grasshoppers.”

The two remaining spies, Joshua and Caleb, however, disagreed! The words THEY spoke reflected a deep and abiding trust in the God who had led them from slavery to freedom. Their accounting and their report gave testimony to the God who’d provided and protected them miraculously time and time again.  “We can take the land!” they assured Moses, "because God is with us!"

The people were readying themselves to enter an uncertain future, a place they'd never traveled before.  Knowing the people would be scared, in the giving of their report, they were asking God's people to be courageous and to trust God once more. Trust God, who has always made a way, when and where there seemed to be no way.

There was no reason for God's people to fear failure, because God had already promised them a future. God had promised that their future would be bountiful. Long before their arrival at this moment, God had already scouted out the Promised Land and determined it was perfect for God’s people and their future.  There was no reason for them to be paralyzed in fear. The Israelites knew what God could and would do because of what God had done for them in the past. All they needed to do was continue to trust AND obey.

While you and I are not standing poised to enter the land of Canaan - we are standing on the threshold of entering another year - uncharted territory. In this sense, we too, are standing with our faithful ancestors on the cusp of something new - of a promised future.

We can’t send spies into 2023. We can’t find out what next summer will be like. We can’t scout out the landscape of next November. The truth is that we don’t even know what tomorrow or the remainder of today holds.

And yet, we can trust in God’s perfect timing, and it is for God’s purposes that we are being led and propelled into the future (whether we are ready to go or not). As a church - we are here - in this time and place in history - to do God’s Kingdom work. We are here and being led into tomorrow - for God's ministry – for God’s purposes – not our own.

The same can be said of our personal lives. As God’s faithful people, we are held in God’s perfect timing and in the light of God’s divine purpose and plan for our lives.

Like the Israelites, in this lifetime, we will certainly come face to face with giants - things that seem undefeatable, impossible to tackle and overcome. It may be something we’re under the power of or are afraid. It may be someone, a situation, or something that seems to always loom large than life - which never seems to stop bothering us. Maybe, in the past, you’ve tackled that giant and prevailed for a week or two or even a month and thought you were eternally victorious! And then, with a vengeance, the giant showed up to threaten you. Even today, you are afraid of being overpowered. Perhaps, like the Israelites, you are feeling like a grasshopper, standing in the presence of a giant.

The good news is that no matter the giants we are facing, we do not do so alone – we do not face them in our strength, alone. And this is good news, because if all we had to rely only on was ourselves, then as the saying goes: we are up the creek without a paddle. We will fail. We might win a battle or two, but we will lose the war against our giants if we rely only on ourselves.

Scripture reminds us to “be strong in the Lord and in the power of God’s might.” (Ephesians 6:10). In other words, we cannot defeat our giants on our own strength. We can only do it through God’s strength, with the power of the Holy Spirit. We trust in Christ’s conquering, victorious power when facing our giants. Every battle we face has a spiritual element to it!  In acknowledging the spiritual nature of our battles, we know that we can and will be victorious, through CHRIST who loves us.

And if the giant we are facing is terminal illness or death – we are promised that even this giant – that especially this giant – we will eventually defeat - because that battle has already been won for us, through Christ who conquered the grave. Be strong in the Lord and in the power of God’s might! Entering the Promised Land is still promised!

In this season of Advent, we turn our attention to the Christ-Child, to Mary, and Joseph - the characters of the Nativity story. In looking at Mary, the unwed teenage mother whom God called upon to bear Christ to the world, we are again reminded of this truth – of the hope and peace which is ours when we rely on the strength and might of the Lord.

In facing the giant task requested of her – for which in saying “yes” to God, could likely lead to her being stoned to death; which would likely end the promise of a relationship with her fiancé, Joseph, and thus, a safe and secure future;  which would no doubt end with her being shamed, shunned, and being cast out by her family and community – Mary faced the giant task, the superhuman job of bearing Jesus to the world.

Mary proclaimed, "How my spirit rejoices in God my Savior! For God took notice of this lowly servant girl, and from now on all generations will call me blessed. For the Mighty One is holy, and he has done great things for me. He shows mercy from generation to generation to all who fear him. His mighty arm has done tremendous things! He has scattered the proud and haughty ones. He has brought down princes from their thrones and exalted the humble. He has filled the hungry with good things and sent the rich away with empty hands. He has helped his servant Israel and remembered to be merciful. For he made this promise to our ancestors, to Abraham and his children forever.”

By trusting in God, by being obedient to following the Way-Maker, the One who makes a way where there seems to be no way, we too, can look ahead to an unknown future, with hope and peace. Through Jesus, the babe born in Bethlehem; through Him who died and rose again, in all things, in facing all giants – we have joy in knowing that we are more than conquers!

There is no giant too big! As the song goes: There is no mountain too high and no valley too low! There is NOTHING - life NOR death, angels nor demons, not the present nor the future; there is nothing in all of creation...there is NOTHING...there is not a GIANT you will encounter - that is be able to separate you from the love of God that is in Christ Jesus our Lord.

The giant you face may be big – but our God is bigger!

Praise be to God for this Good News!